Canada  has a lot to lose from the  possible global decisions being made in Copenhagen over the next few weeks – and most of it revolves around oil and natural gas reserves that are being exploited in Northern Alberta. We’ve recently heard of the climate-gate scandal, well, there’s plenty of scandal brewing on the peak oil front. Canada’s policy on both has the international community talking.

One of the troubles with climate change is that the weather is an easy target, we all talk about it every day, and most of us are no better than the weathermen on TV at discerning what the temperature is going to be tomorrow, let alone in 100 years. We all know what a couple of degrees feels like, and find it hard to imagine that (a) it could possibly be our fault that it is happening and (b) that such a “small” change could have such a big impact.

Why the Concept of Peak Oil is Hard to Nail Down – an example from BP’s Tiber field. 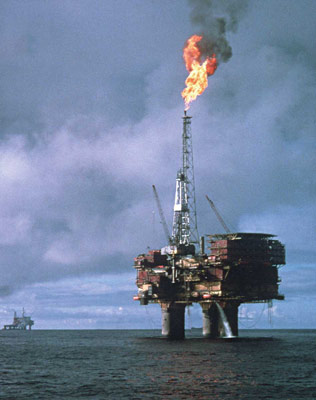 The topic of Peak Oil is another beast all together. Not only have we come to rely on the end products of the industry, but the data that could help determine where we stand has long been held as “trade secrets”, by the very companies who gain the most from extending our reliance on oil. Also, the numbers that are mentioned in press releases and news articles are staggering…

The Tiber find is just one example. There may be as many as 4bn barrels of oil in place – as much as the North Sea’s Forties field – but the hydrocarbons are located in 4,100 feet of water, which makes them very expensive to extract. And BP admits there can be no guarantee exactly how much can be recovered from the lower tertiary sands of the Gulf.

Source: Peak oil: the summit that dominates the horizon

[ad#200-left]Unfortunately, even if there are 4 billion barrels of oil in this find that has been described as a “giant” field, this is only the equivalent to about 50 days of global demand. This is the biggest oil find in the past three years, and if extracted will account for some of the toughest conventional oil to be produced. It would be one of the deepest wells ever drilled, and is situated right in the middle of hurricane territory. Overall, this giant oil field, despite making billions of dollars of profit for BP, and employing a whole bunch of people along the way, represents the futility of the task of fueling our economy as we’ve become accustomed to.

[Tiber] is about 250 miles southeast of Houston at a depth of more than 35,000 feet — greater than the height of Mount Everest — and well below the gulf floor.

It is part of a new frontier of exploration where oil companies are spending billions of dollars to find oil on the bottom of seas off the shores of Brazil and West Africa and boring through miles of rock, salt and packed sands.

and even with all the hype over the find,  BP said “it doesn’t yet know if Tiber will prove commercially viable”.

To make matters worse, the International Energy Agency has come under scrutiny for supposedly messing with some numbers, (I notice that no one is calling this oil-gate, petro-gate  or anything silly like that!).

The debate has intensified in recent weeks after whistleblowers claimed the IEA figures were unreliable and subject to political manipulation – something the agency categorically denies. But the subject of oil reserves touches not just energy and climate change policy but the wider economic scene, because hydrocarbons still oil the wheels of international trade.

Even the Paris-based IEA admits that the world still needs to find the equivalent of four new Saudi Arabias to feed increasing demand at a time when the depletion rate in old fields of the North Sea and other major producing areas is running at 7% year on year.

Source: Peak oil: the summit that dominates the horizon

Where is the outrage over this, where are the people crying for the truth on peak oil to be published and the necessary decisions made to ensure future generations have opportunities, and are not left with a broken shell of what we’ve enjoyed?

George Monbiot gets it, and even from all the way across the atlantic ocean he sees how badly Canada is botching any chance for the future, all because of oil. And really, it is tough to call it oil, in most reports they call it non-conventional oil, you’ve probably heard it referred to as oil sands, but the reality is closer to tar sands. I’ve talked about this before here at UrbanWorkbench.

The national policy on the tar sands, which happens to be the most development friendly of any nation in the world,  has hijacked the national policies on trade, water, energy, climate change, transportation and possibly others areas as well. Let’s see how closely Canada’s position at Copenhagen mirrors that of the States.