Hachette Publishing in Canada were kind enough to send me a copy of Christopher Steiner’s “$20 Per Gallon: How the Inevitable Rise in the Price of Gasoline Will Change Our Lives for the Better

“,  a recent release focusing on how the structure and activities of society will change as the inevitable tide of rising fuel prices overtakes us.

Many pundits around the globe have been dismissing the concept of Peak Oil recently, claiming that the drop in fuel prices since the high in 2008, along with the occasional news article on new discoveries points to a long and fruitful future of oil for generations to come. Personally, I think this is wishful thinking, and that we are headed for a period of energy contraction, resulting in massive changes to how we behave as societies.

Christopher Steiner is one of a number of recent authors who have considered the future of everything from cars, Walmart, delivery services and the suburbs as the price of oil based fuels increase. Interestingly though, Steiner is not a seasoned finance or oil expert, rather he is of the same generation as my wife and I, and like us sees that the coming changes in oil availability and price are not reflected in the decisions of most organizations, governments or the general public. Also like us Steiner is a Civil Engineer and a writer, he blogs and is currently a staff writer at Forbes Magazine. 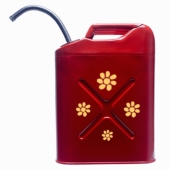 Steiner unveils the future impacts of rising gasoline prices in a manner that should appeal to most Americans, in dollars per gallon. The Prologue to the book starts at $4 a gallon, and from there each chapter examines the impacts of a further $2 increase. Steiner puts a cheery spin on the outcomes of higher gasoline prices, from the Financial Times review:

FT.com / Business education – The brighter side of expensive oil

Expensive petrol, he suggests, will bring all sorts of benefits, from lower road deaths and less obesity to tastier, locally grown food. It could also mean the downfall of Wal-Mart and the “carnival of excess” that is Las Vegas: deaths that Mr Steiner does not seem inclined to mourn.

There will be costs, too, he admits: the bulk of the US aviation and motor industries is likely to join Wal-Mart in the history books. But overall his intent, as elegantly outlined in the epilogue, is that civilisation can survive – thanks in large part to nuclear power – and indeed flourish after the end of the Oil Age.

$20 a Gallon is a provocative book, you are meant to read it and question what is being said. It runs counter to 99% of what the rest of North America is talking about. This is no sissy-list of feel good environmental achievements like reducing plastic bags at the local grocery, or installing a 60 gallon waterbarrel. Steiner tackles the issue of likely fuel price rises in the near future, (no timelines are given as to when this will happen – predicting the effects is plausible, but anyone who believes they can predict timelines or the sequence of domino-like industry and societal crashes that are impending deserves to be wrong). The methodology is as linear as only an engineer could dream of, and it provides an engaging structure to the book which keeps you turning the pages to find out what else will change as prices continue to rise.

How It Impacts Us

I highly recommend this book; the characters that are introduced and scenes that are depicted provide crystal-clear insights into the future, whether it is subway tunnels, Ford F-350s, used aircraft junk yards, local food, electric UPS vans or high-rise New York-like density in major metropolitan areas all over the country. The chapter on the fate of small towns (Chapter $14) was most interesting to read as it reinforced many of the very considerations which led us to move to Castlegar in the first place, and the thought behind setting up TransitionCastlegar and initiatives such as attempting to reinstate urban agriculture and backyard chickens in this town. Walmart, Canadian Tire and the rest of the big box stores will not survive $14 a gallon gas (at the current exchange rate this is just over $4 a litre Canadian); local resilient communities will evolve and adapt out of heavy reliance on big box stores that will one day become “ghost-boxes”, unusable for anything remotely valuable to small communities.

[ad#200-left]The book is not without its faults.  in my opinion it overstates the likelihood of electric vehicles, admittedly, Steiner cloaks his enthusiasm for plugin hybrids and future plugin electrics with many statements regarding the cost of purchase, and somewhat about the cost of the infrastrucutre to convert the existing fleet of US vehicles to an alternative fuel source. Equally, the role of subways in the future is not likely to take hold as firmly as the picture Steiner paints. He offers no real timelines, but I believe the opportunity for whole networks of subways to be built in Cities across the country, without cheap plentiful oil and the level of capital that coexists with this condition, is decidedly impossible – Subways are by far too grandiose a solution to the transportation problems in a lower carbon economy.

Additionally, Steiner’s optimism, and almost linear pathway toward a Utopian future where clean energy is mass produced and goods traverse the ocean on massive nuclear powered tankers and all the cool people live in the high density city. Even without the flying cars, I’m struck by  a case of the techno-fantasy and while the book dwells in that space between fact and fiction, some facts have been overlooked or neglected in determining the fate of the book. There is very little mention of economics outside of the price of oil, will economies be stable enough to actually support these large scale ambitions? Also, being a US-centric examination, there is little acknowledgment of the rest of the world, particularly those who look to the current standard of living in the West and aim to emulate it as soon as possible, from diet, clothing, goods to the vehicles we drive – what will become of these nations who may feel robbed of their opportunity to thrive? There is no mention of climate change and the whole “carbon” thing. The idea of a limit to growth is not considered, other than in terms of available fossil fuels and to some degree food production.

This is one of several books I’ve read on the topic, certainly one of the most interesting to read, and well deserves a place on my shelve next to books such as the Long Emergency, Plan C, The Transition Handbook and Depletion and Abundance. Additionally, you can see Christopher Steiner’s Blog here, I’ll be watching out for other books from this writer in the future.

You can buy “$20 Per Gallon: How the Inevitable Rise in the Price of Gasoline Will Change Our Lives for the Better” now at Amazon.com